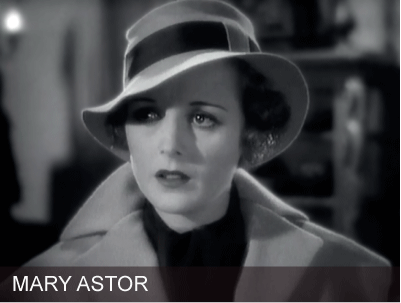 Mary Astor, born Lucile Langhanke in Quincy, Illinois in 1906, was an only child.   Her father was a high school German teacher.

She was home-schooled and won several beauty contests before becoming a model in New York City.

In 1922, at the age of 16, she appeared in her first credited role in a feature-length silent film for Selznick Pictures.   Astor went on to appear in more than 120 feature films through 1964 and received the Academy Award for Actress in a Supporting Role for her performance in The Great Lie (1941).

She struggled with alcoholism for most of her life and was committed to a psychiatric hospital in the late 1940s.   After emerging, she converted to Roman Catholicism and began to appear as a television series guest star through the early 1960s.

She died of complications from emphysema in Los Angeles, in 1987, at the age of 81.

Joan Allen in The Contender

Ellen Burstyn in Requiem for a Dream

Tom Hanks in Cast Away

Laura Linney in You Can Count on Me

Lionel Barrymore in A Free Soul

Wallace Beery in The Champ

Helen Hayes in The Sin of Madelon Claudet

Lynn Fontanne in The Guardsman

Alfred Lunt in The Guardsman

Adolphe Menjou in The Front Page

Norma Shearer in A Free Soul